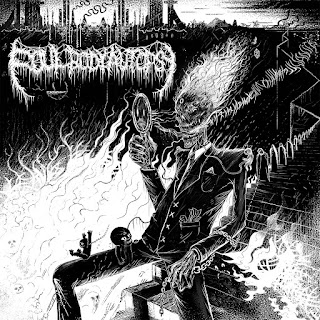 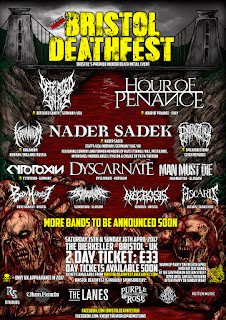 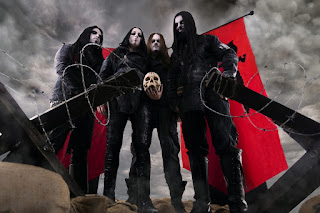 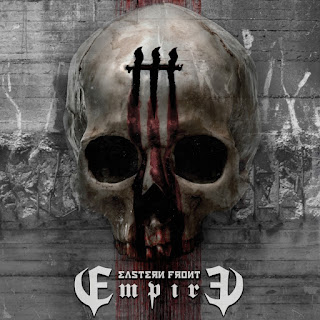 The Blog Is Back!

I'm Back!
Yeah that's right, the UNITED KINGDOM EXTREME METAL review blog is back up and running and taking submissions from UK bands for reviews!
The best way to get your release, new or old, is to email a download link or link to a streaming site to: info@ukemrecords.co.uk / ukem@hotmail.co.uk
thanks all!
Posted by UNITED KINGDOM EXTREME METAL at 13:10 No comments:

Image For those of you who prefer your death metal to be of the absolutely monstrous variety, then cancel all your plans on Sunday 24th May at once and instead get your ass to The Bierkeller in Bristol for quite possibly the heaviest show that the city has ever seen. Brought to you by End of the World Promotions, Slam Fest consists of some of the finest brutal death and slam that Europe has to offer. Whether you prefer groove laden, guttural growls or brain bursting blast beats, Slam Fest is guaranteed to have at least two bands that will dramatically harden your nipples.

After slaying Camden magnificently in September, Norwegian maniacs Kraanium return to the UK to unleash their very unique brand of pounding brutality upon Bristol. Having deservedly landed the headline slot, the slam masters will be bringing their harrowing brand of intense, groove heavy slams to Bristol for the very first time. Kraanium are a band that have gone from strength to strength since their reformation in 2006 and are definitely not to be missed at Slam Fest on any accounts. If you like your metal to be of the horrifyingly brutal variety then look no further than local lads Necrosis. Since the storming success of their debut EP Catatonic Psychosis in October 2013, Necrosis have become an established act on the UK extreme metal scene and landed themselves some pretty enviable slots at killer European festivals such as Gothenburg Deathfest last September and Death Feast this September, sharing the stage with pioneering acts Suffocation, Nile, Asphyx and Disentomb. Kraanium are not the only European band taking to the stage this weekend. One man slam monster Carnifloor is travelling across land and sea from sunny Amsterdam to treat Bristol to a hearty dose of pure slamming aggression. Influenced by brutal death masters Necrophagist and Beneath the Massacre, Carnifloor is an unstoppable one man metal machine who you definitely do not want to miss out on seeing. Unless of course you don’t like incredibly talented musicians. Carnifloor is also a member of Dutch brutal slammers Korpse and Norwegian slam masters Fermented Masturbation. In keeping with the European bands theme, French quintet Darkall Slaves are primed and ready for their UK debut. After the success of their 2014 full length debut Transcendental State of Absolute Suffering, fans of death metal across the world are eager catch one of Darkall Slaves’ live performances. Their will undoubtedly be those in the crowd specifically looking forward to Darkall Slaves bringing their arsenal of superb death metal to the party. Returning back to the UK now and no nonsense Brummie foursome Spawned from Hate have earned themselves a place on the bill. Spawned from Hate’s incredible talent has set them up as esteemed regulars on the UK death metal circuit, having shared the stage with the likes of Cryptopsy, Cancerous Womb and Defeated Sanity. This is a band perfect for those who like their death metal to be of the technical and old school variety. Two man slamming act Chainsaw Castration have earned themselves a slot on the bill and with a varied set of influences ranging from Entombed right through to Fermented Masturbation, you can see why. The Nottingham duo provide some of the most thunderous and guttural slams of the evening with a slow but incredibly intense sound that grabs you by the pit of your stomach and launches you into a fit of heavy audio delight. Reigning down on Slam Fest from the grim north are five piece Visions of Disfigurement. Hailing from Manchester (or Slamchester as the band refer to it), the band pack a mighty punch with their unique brand of macabre, almost blackened slam. Employing a variety of different vocal styles, the bands groove heavy feel makes them almost an instant winner. If you’ve ever listened to Whitechapel and thought they could do with sounding a bit more like Raped By Pigs, then look no further as you’ll have found your new favourites in Visions of Disfigurement. Finally, Slam fest plays host to an exclusive performance by elusive new brutal death act Inebrious Incarnate. Consisting of Federico Benini and Doug Anderson of Unfathomable Ruination fame, Inebrious Incarnate are the faceless band of the evening, with little to no information about them anywhere. There’s nothing like a wild card to liven the proceedings up a bit! In all honesty, Slam fest is by far and above the heaviest show to grace the West Country for many years. It encompasses every facet of the glorious spectrum that is death metal and is categorically not an event to be missed. Having already had to move venues once due to substantial ticket demand, get yours here to avoid disappointment!