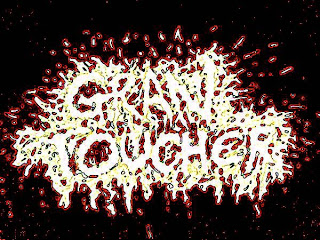 Human Cull cd (Self released-2011)
Noisy, chaotic, grinding madness. One way of describing Gran Toucher’s ‘Human Cull’. This disc has it all, blasting drums, whirlwind guitars, frenzied vocals (both guttural and screaming). Song structures remain simple throughout, reminding me of early napalm death in places (this is a good thing!!). The production suits the music perfectly, noisy, raw and with a bass sound that sucks the air from your lungs – it’s all fucking good stuff. The pace is relentless throughout the entire disc, most songs ranging from all out blast to sludge laden nastiness – it works well though! Song lengths are typical of the genre, some lasting a matter of seconds! 11 tracks overall, I would have loved the disc to be longer in length with more songs. No sooner have you pressed play then Gran Toucher have punched and kicked you into submission and have walked off with a smile on their faces, it all being over in a flash, the taste of blood left in your mouth but with you wanting more! The band describe this cd as a concept about the end of mankind, this is the perfect soundtrack to all life ending.
Well recommended 7.5 / 10 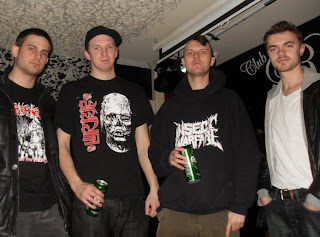 http://myspace.com/grantoucher
Posted by UNITED KINGDOM EXTREME METAL at 12:59 No comments:

Thanks for speaking with UNITED KINGDOM EXTREME METAL, how are things with you?

Apokalyptic Hails Chris! Thanks for the interview, things are all good here thanks, busy working on new material for our next studio recording which is looming ever closer.
For those unfamiliar with you guys, tell us more about the band.
We are a four headed Apokalyptic Death Crust beast that was formed in early 2006 but due to not being able to find likeminded members for a while we didn't become an active entity until early 2009 after finally finding someone to drum for us, a Swedish guy called Linus who we met totally randomly, outside of my flat actually, he was walking past drunk one night soon after moving to Durham to study here and noticed a Skitsystem sticker on my apartment window (Skitsystem are a Swedish Crust band for those who don't know) so he banged on my window, we ended up having a chat and the rest is history after that and since then things have continued to roll steadily onwards for us, by middle of 2009 we had a set ready to play live, played our first gig in September of that year in Newcastle as a 3 piece no bass, we actually found our bass slayer Dan at that gig, he liked what he heard so wanted to fill the bass vacancy, we have continued to gain momentum as a band ever since.
You have recently released your debut e.p, how has this been received? 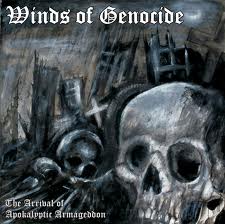 Yeah it ("The Arrival Of Apokalyptic Armageddon") has been available for about 5 and a half months now, response to it overall has been awesome, heard and read so many positive things about it which is great, it has been selling steadily and it has recieved some excellent reviews in both printed mags and online zines/websites/blogspots, and just recently we have secured some vital and much needed overseas distribution for this release with MCR Company in Japan (which is one of the largest punk labels and distributors over there) and also Profane Existence in the states. Due to our music having strong death/black/thrash influences we seem to have developed a steadily growing number of "fans" from both metal and punk backgrounds which is great to see, the whole original aim of the band was to have wide crossover appeal with our music and that seems to be working out exactly as planned, we appeal just as much to black/thrash/death metal heads as we do to the crust punks.
It would be nice to get the EP released on vinyl at some point. It is supposed to be coming out on a limited run of pro cassette tapes too via Witchhammer Productions who released our necro as fuck live rehearsal demo last year on a limited run of 200 hand numbered copies. But having something released on vinyl is still a dream of mine!
What releases do you have planned for the future?
Right now a split CD with the Japanese Black Thrash kult ABIGAIL which will be released via Witchhammer Productions in Thailand sometime later this year and there has also been talk about doing a split 7" which a label has approached us about but nothing is concrete or confirmed about that as yet. Both bands will be hitting the studio during the summer to record songs for their respective sides of the split. We will probablys contribute 4 songs for our side. Some new songtitles are "Plague Of Devouring Pestilence", "Into The Darkness Of Eternal Nuclear Winter", "Procession Of Spectres", "Reaping The Bloodied Harvest" and "Murderous Bloodthirst".

How do you go about writing songs?
Do all of the band members contribute?Some riffs are already written in advance and some riffs are born out of jamming, myself and Linus have came up with parts for a couple of songs with him on guitar and myself on drums for example. Yes it is very much a band effort overall when it comes to writing and arranging songs, most of which takes place in the rehearsal room and even I myself have contributed a couple of riffs to some new songs! But most of the riffs have been written by Glynn, Linus and Dan who collaborate very well and effectively with each other to come up with new songs pretty quickly. We have managed to write 4 new songs within the space of just a few months, we need to find a couple more songs currently before we hit the studio in late June but with recently finding rehearsal facilities much closer to where most of us live then that will no problem as it means we can rehearse more regulary together and have more time to work on new material. 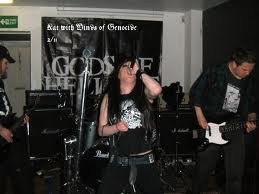 What is the extreme metal scene like in the UK?
Well in my personal opinion I think it is healthy overall and there is some great extreme bands out there in this country playing all different kinds of extreme music, not just metal but also crust/punk although to be honest I wish there was more UK death metal bands out there that played in the old school style, there seems to be too many of those tech death broodal core type bands out there with boring as fuck looking logos who are just obsessed with virtuosity and technicality and throwing as many show offey noodling riffs and time changes into one song as possible rather than writing actual riffs and hooks, plus a lot of it is triggered to fuck and so overpolished and just so SAFE sounding. Don't get me wrong I think there is some great death metal bands from the UK, but the more boring ones far outweigh the interesting ones to my ears compared to say the amount of great death metal bands currently coming out of the Swedish -Nordic underground Death metal scene, there seems to be a never ending (flowing) stream of quality death metal coming out of that country again, it seems a lot of the newer bands over there really know what real death metal is about and should sound like, dirty, evil, morbid, nasty, grotesque, dangerous etc and are going back to the roots of the death metal sound and attitude instead of trying to make it all progressive and technical sounding, that is something I hate about the modern metal scene, too much obsession with technicality and less writing of actual decent songs! More people in bands over here need to listen to shit like Autopsy, Repulsion, early Entombed, Nihilist, Carnage, Death Breath, early Unleashed, early Possessed, old Massacre, Asphyx, Hellhammer, Celtic Frost, Dismember, early Grave, God Macabre/Macabre End and such stuff I think and get abit of dirt under their fingernails and plectrums!!!. It is all well and good being great at playing guitar or whatever but a complete waste of fucking talent if you can't actually write decent songs and all those tech metal- death bands just make me wanna go ZZzzzzzz. that stuff completely lacks soul and substance to my ears.My views might totally piss some people off within the UK scene but I don't care. There is too much what I view as false death metal out there thesedays played by people who look like they belong in a boy pop band or who have just stepped out of a clothing catalogue, fuck that, thats is NOT death metal!.The local scene here in Durham is starting to pick up though, aswell as ourselves and THE OBSCENE there is a great young local thrash metal band called VORTEX who have a strong bay area vibe and sound to them overall with some death influences, those guys have the right attitude towards how metal should sound like, watch out for another band that has been formed by Luke their guitarist called PESTILENT SAVIOUR which is going to be total old school ancient sounding death metal, it is great to see a younger generation of local metalheads that are going back to the roots of extreme metal for inspiration in both sound and attitude and are digging into the depths of the metal underground to find exciting new bands both older and newer instead of just being content with what the mainstream metal media is forcing down their throats and also watch out for UNCOFFINED , a Horror Doom-Death band that I am drumming and growling in alongside Glynn our guitarist, we have a couple of songs written already. It is macabre!
Are you guys working on recording a debut album? If so tell us more about that and what to expect?
No plans to do a full length album as of yet but it would be great to get the opportunity to record one at some point. Time will tell.

Lyrics are an important aspect of extreme metal, where do you draw influence from and what are the lyrical themes?
my lyrics are very dark and apocalyptic and mix up fantastical scenarios with reality and are very much influenced by subjects such as the apocalypse, doomsday, armageddon, the four horsemen, mankind basically eventually bringing about its own downfall and self destruction due to stupidity and greed, wars throughout the centuries and the horrors and atrocities that are associated with them and the subject of oppression and death in general.I come from a death metal background originally so my lyrics also have a strong death metal edge to them I think, as they are not completly written in a realistic context and there is a lot of fiction in my lyrics, I like to twist them into a dark grotesque storyline and scenario overall, some of which will probably become a harsh frightening reality one day and some of the lyrical topics I have wrote about have already became a gruesome reality. There is also an evil occult slant to some of my lyrics which have been influenced by my personal interest in occult subjects.

What should we expect from the band in the near future?
More of the usual RAW DEATH CRUST CHAOTIC MAYHEMIC DISTORTION FROM HELL!!!!Thanks once again for speaking with us. Any last words you wish to share with our readers?
Thanks for the interview and support Chris much appreciated. Our CD is available direct from us either via paypal or the old school snail mail way so email me at shevil.kitty666@gmail.com if you are interested in picking up a copy of our "THE ARRIVAL OF APOKALYPTIC ARMAGEDDON" CDEP. Only £4.50 (UK), £5.00(EUROPE) and £5.50(R.O.W.) INC P+P. Watch out for the split with Abigail and other releases from us. Beware! The next storm of aural armageddon is on the horizon!! Ride the wings of death into hell!!.
http://www.myspace.com/windsofgenocide
Posted by UNITED KINGDOM EXTREME METAL at 09:23 No comments: