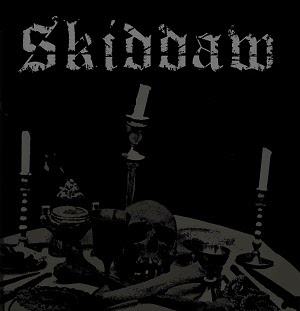 SixSixSix Music 2014
1.Skiddaw Forest 2.Skiddaw Towers 3.Gates Of Beleth 4.Even Titans Fall
Taking their name from the Cumbrian mountain found within the depths of the Lake District, black metal duo Skiddaw have unveiled their debut self titled EP. Opening track "Skiddaw Forest" is a slow, unyielding piece of work with a calculating drumming display mixed with pleasing bass melodies and tremolo guitar sounds that leads nicely into the more aggressive "Skiddaw Towers" whose guttural vocal display combines well with the clamor of drums and the rumble of bass as well as more venomous riff-age! Skiddaw's work has a slightly under-produced feel, that of many demo releases and adds to the ethereal and brooding qualities that the band cultivate yet at times despite the nihilistic feel of black metal Skiddaw do come across as catchy and extremely enjoyable! Featuring a more direct and rampant approach as opposed to the bands thoughtful and almost progressive nature previously, "Gates of Beleth" is a surging shot of adrenaline fuelled hostility, belligerent blast beats and cold, menacing riffs! A true icy blast of old school black metal savagery! To finish with Skiddaw dish out "Even Titans Fall", a track that makes the rest feel docile! This is how to end a demo, with out right fury! Skiddaw then are an impressive proposition if their opening demo offering is anything to go by! Keep your eyes and ears to the north and listen out for the Cumbrian's grim call!
7 Out Of 10 - Luke Hayhurst
Band Page: Here
Posted by UNITED KINGDOM EXTREME METAL at 10:06 No comments: 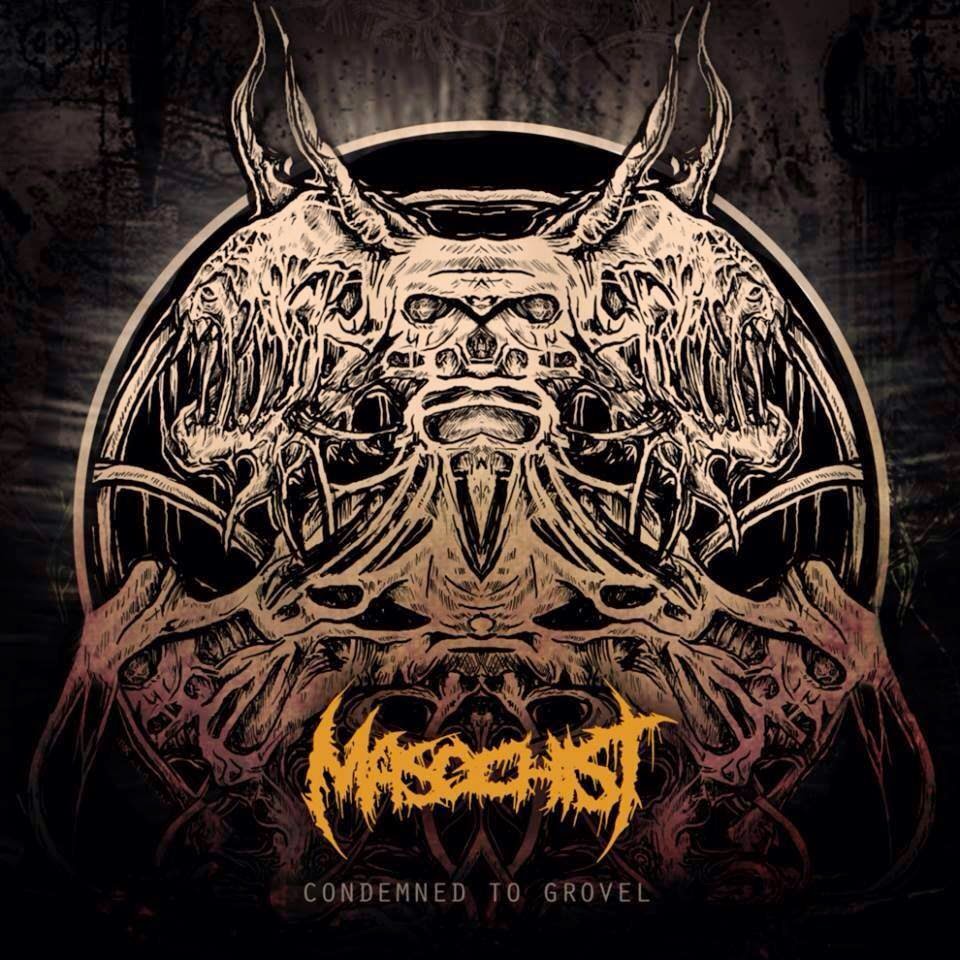 UKEM Records 2014
1.Prologue to Prolapse 2.Forced Fornication 3.Vomit Every Dreg
4.A Peeling Flesh 5.Foetid Existence
Cometh the hour, cometh the band! From a humble working class background in Wakefield, death grind outfit Masochist have risen and as time goes on and gigs go by they convert more and more people into fans! Now Masochist have returned to UKEM Records for their brand new EP release going by the name of "Condemned to Grovel", five tracks of putrid extremity, sickening lyrics and brutal noise! Opening track "Prologue to Prolapse" is a slow, menacing beginning that casts an immediate dark and ravenous atmosphere before the quick paced brutality of "Forced Fornication" can kick in! Even here though for the most part Masochist slow down the pace and concentrate on crushing simplicity as riffs, drums and bass unite to strike fear into the hearts of the uninitiated whilst guttural vocals spew forth endless depravity and filth! This flicking back and forth from sluggish riff fury to balls out fast paced carnage showcases all of the weapons in the Masochist arsenal! 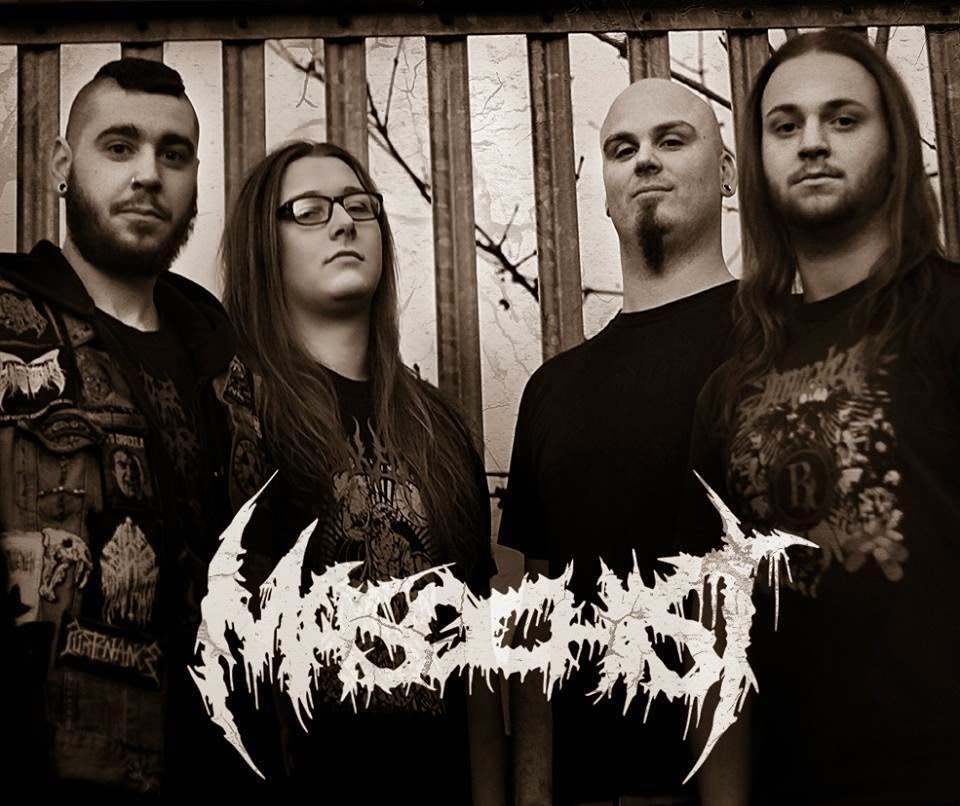 Adding a little humour to proceedings the intro clip for "Vomit Every Dreg" comically states "blood was dripping from his mouth, blood...blood...and bits of sick", before another bout of putrid gore soaked abomination is delivered with crippling sledge hammer like riffs, slow maniacal fury and more throat searing vocals. If the previous tracks showed a willingness to be versatile and in some ways thought provoking, "A Peeling Flesh" is the exception to the rule and this punishing trap is nothing short of a pile-driver of fast riffs, harsh vocals and the deep rumbling of well executed bass and drumming work! To finish with Masochist unleash "Foetid Existence", a short track of pummelling ferocity that brings proceedings to a swift, violent end! It's great to see the return of Masochist and to see them with UKEM once more! Watch out for more Yorkshire brutality in the near future!
8 Out Of 10 - Luke Hayhurst
Band Page: Here

Posted by UNITED KINGDOM EXTREME METAL at 20:25 No comments: 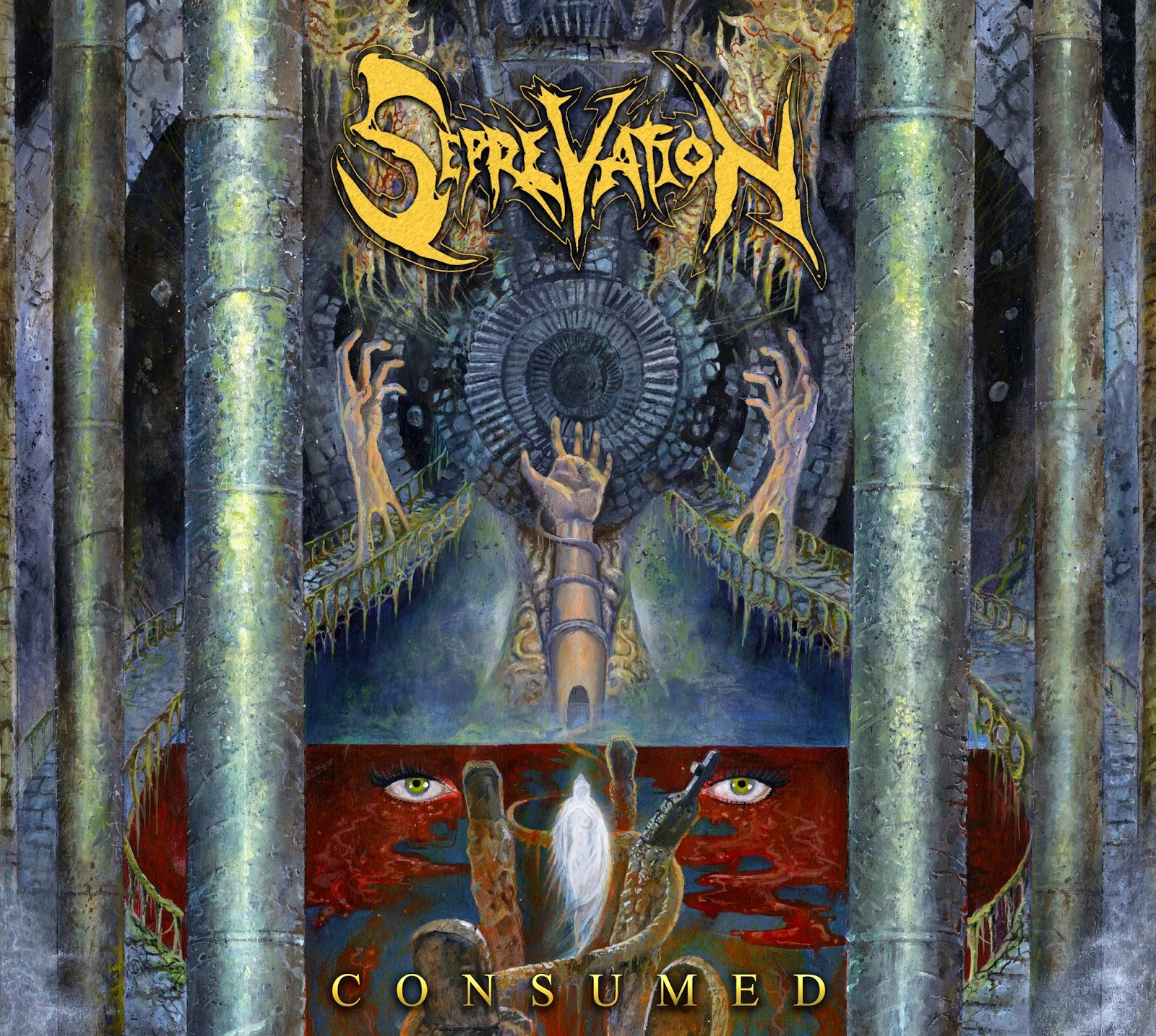 Self Released 2014
1. Divine Devastation 2.Servants of Suffering 3.Ascension of Agony
4.Sarcophagal Chamber 5.Dreams 6.Slave to the Grave 7.In Torment They Burn
8.Sea – Of Thoughts 9.Postmortem Lividity 10.Between two Worlds
UK Death/Thrashers Seprevation have dropped their debut album upon us. Entitled simply “Consumed”, this 80′s and 90′s inspired tome of evil rips into life with “Divine Devastation”, one of many hints at an anti-religious theme running through the album! Yet for all the brutal build up and rampant expectation, its sombre, almost pure sounding dashes of melody that greet the ear when hitting play! Not that this lasts very long, soon enough the ravenous old school riffs, frantic drumming and Sepultura like vocal tones and musical vibes are taking full effect! Fast, frenetic and utterly devastating, Seprevation take no shit and give no mercy in their quest for dominant, death dealing mayhem! Bass heavy moments such as in “Servants of Suffering” add to the 80′s vibe and as things progress that Sepultura influence continues to be worn on sleeve! Still, this is no clone or covers band and Seprevation make this sound their own and in doing so display a mighty amount of technical prowess and musical talent! Song writing too is of a high level despite the majority of the music on offer being fast, hard and chaotic! Catchier tracks such as “Sarcophagal Chamber” (Sarcofago will be so proud) keep the album fresh and lively even into its middle stages and on the whole the album is of a superb quality throughout and never wavers in its aim for filthy, old school brutality!
7 Out of 10 - Luke Hayhurst
Band Page: Here
Buy It: Here

Posted by UNITED KINGDOM EXTREME METAL at 16:02 No comments: